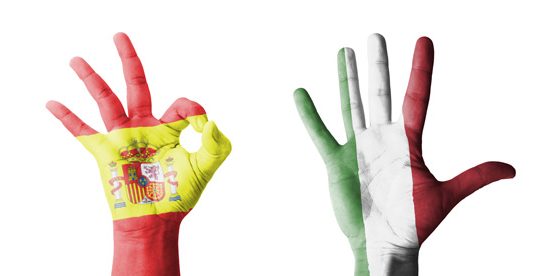 The Ethnologue Languages of the World, lists that there are 142 sign languages in use, however this number is hard to accurately pin down due to new sign languages frequently being created at schools in village communities with high levels of congenital deafness. Sign language is a complex form of communication comprised of hand gestures, body language and facial expressions and it’s used to allow deaf individuals the ability to effectively communicate their thoughts and feelings. Many people are under the misconception that sign language is universal, however the manual languages differ significantly from one geographic region to the next. Sign languages, like spoken languages, develop naturally out of groups of people interacting with one another; region and culture play a large role in the development as well. Most sign languages are not mutually intelligible, therefore people who do not sign the same language can not understand one another. In some countries like Sri Lanka for example, every school has their own sign language, only known by the students who attend that school. Other countries share sign languages although they are called different names, Croatian and Serbian sign languages are the same and Indian and Pakistani sign language are also the same.

Popular Forms of Sign Language Used Around the World:

Auslan (Australian Sign Language):
Auslan has two main dialects, Northern and Southern, they have different signs for things like animals, colors and days of the week, however grammatical structure is the same across dialects. Auslan is closely related to British Sign Language (BSL) and New Zealand Sign Language (NZSL), all of which hail from the BANZSL language family. Despite the fact that America and Australia both speak English, ASL and Auslan are very different. Auslan uses a two handed alphabet while ASL uses a one-handed alphabet.

British Sign Language (BSL):
BSL has many different dialects that can vary from region to region and they use a two handed alphabet. In 2011, 15,000 people, living in England and Wales, reported themselves using BSL as their main form of communication.

Chinese Sign Language (CSL):
CSL’s signs are visual representations of written Chinese characters, they use a one handed alphabet. There are many CSL dialects but the Shanghai dialect is the most common. The language has been developing since the late 1950’s and The Chinese National Association of the Deaf, is working hard to raise awareness and promote use of the language throughout the country.

Irish Sign Language (ISL):
ISL is mainly used in Northern Ireland and the language is closely related to American Sign Language as well as French Sign Language, however it’s not related to spoken English or Irish languages. The alphabet is signed using one hand. ISL has existed for hundreds of years and was formulated in Deaf communities throughout regions in Ireland. ISL was brought to Australia, South Africa, Scotland, and England by Catholic missionaries. You can still see remnants of ISL in some variations of BSL and used by some elderly Auslan Catholics today.

Japanese Sign Language (JSL):
JSL is very different than other sign languages, it uses mouthing to distinguish between signs and letters within the alphabet. JSL also utilizes more fingerspelling as well as the actual drawing of Japanese characters in the air. JSL is it’s own language aside from the fact that it borrows heavily from spoken Japanese.